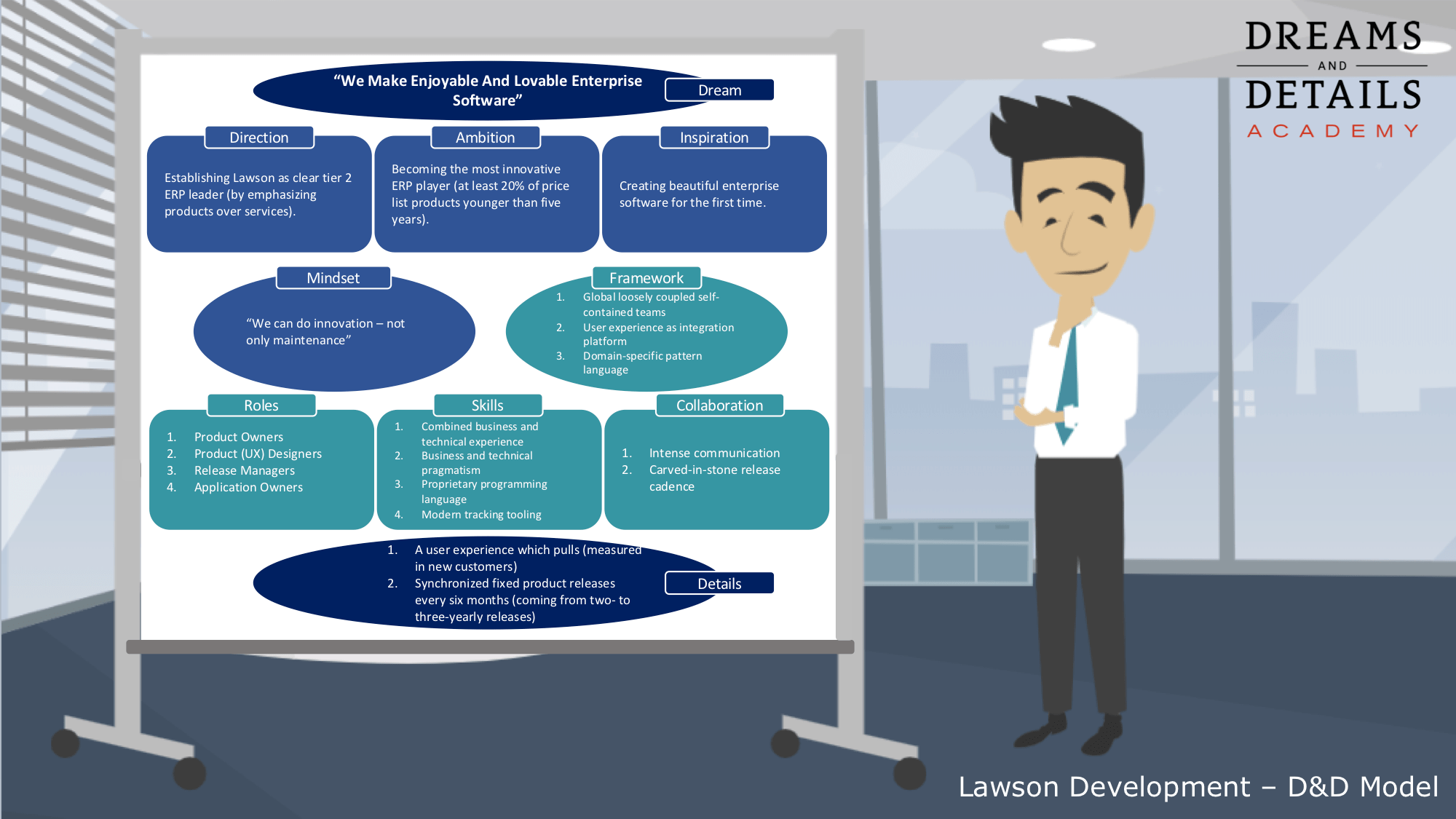 Living a Dream While Paying Attention to Key Details, Turned Maintenance into Innovation

A merger into a slow giant

In 2006 Lawson Software USA merged with Intentia from Sweden. Similar in size both shared more than 20 years of industry-history with thousands of global customers in various sectors. Furthermore, both were focused on ERP and related business administration software. The merger made Lawson a natural contender for leading the so-called group of tier 2 ERP manufacturers (tier 2 meaning mid- to large-size customers – SAP is the leader of the small group of tier-1 players).

Over the years and due to the sheer number of customers, both companies had piled up huge long-term maintenance obligations while the landing of new customers for the existing products was slowing down. Innovation of existing or creation of new products had nearly stalled. Fast forward five years, 20% of the price list products were younger than five years. How did this change happen?

We found ourselves lucky that the need for integrating these two companies yielded a highly inspiring vision of becoming the first ERP manufacturer with a truly beautiful user experience. The user interface of enterprise at this time and in particular ERP software was notoriously ugly and clumsy in comparison to the consumer software experience. To a large degree, this is in the nature of being a very complex software dealing with the peculiarities of the business world. Fortunately, we were able to overcome this hurdle by applying unique advanced client technology with a not yet conceived design.

Furthermore, we introduced a fixed-release-rhythm synchronizing the various development teams to avoid waiting periods caused by global interdependencies. We started with multi-year integration times and advanced into two-weekly builds for the more extensive software systems. The fixed release rhythm gave way to half-yearly release cycles with the potential to increase the rhythm to quarterly or monthly software publications.

In essence, we found that we intuitively applied the recipe for digitalizing a company: leverage of new technology and crank out software at high frequency. With words of the Dreams and Details model, we put our dream of creating a beautiful user experience into words; “We Make Enjoyable and Lovable Enterprise Software”. And with the Lawson Heartbeat, the name for our fixed high-frequency release cadence, we implemented the detailed underpinnings.

Taking the mastery of the associated technology complications for granted let’s focus on the human side here. We were convinced that we would yield the best results if we could unleash the potential of the individual contributors. We felt that self-organizing teams of 5-10 people were the most efficient way of living our dream. To reach this setup, we eliminated a layer of middle management. This was not as easy as it sounds. We even lost some which we didn’t want to let go. In parallel, we looked into the composition of the teams. Some people like to take the lead, and others prefer to be led. Some people love to create new things, and others want to be loyal to their existing babies. Some people are comfortable with chaos and instability, whereas others wish for order and stability. In consequence, we needed to reshuffle many folks into new settings. And we needed to do this without “letting the IP walk out the door”; i.e. we wanted to keep the natural attrition low.

In the end we resorted to the Chinese philosophy of yin and yang to explain the duality and the complementary nature of the various responsibilities and tasks at hand.

Last but not least, we collectively needed to re-learn what software is. Why? – We had already more than 20 years of software development under our belts; i.e. we know it already. Actually, our dream suggested otherwise – because nobody had reached the level of beautiful enterprise software yet. Driving this movement, we created the notion “the user interface is the application” with the goal of a much tighter symbiosis between user and software. As a sort of testimony of our efforts, Bill Gates demonstrated our software at one of their developer conferences under the heading of “a new class of enterprise software”.

The beautiful user experience pulled many people along. In particular, the builders turned out as being highly inspired. But we also needed something to reach the group of people who ensures that something gets out the door. We needed to excite our deliverers – this is where the synchronized release cadence helped. Naturally, this initiative met a lot of resistance; in particular from a technical point of view. But as soon as the folks experienced the rhythm of delivery as being highly effective in showcasing their contributions, we had won them over, and things fell into place.

Interestingly enough, our Lawson Heartbeat turned out as the key to the overall acceleration of deliverables. Particularly in integrated software it is not uncommon that you have many so-called global side effects. I.e. a change in one place requires a change in another place. Now in case these two places belong to different development teams, the question arises who should change their code and how. As you can imagine these are typically very intense discussions.

Furthermore, even after having decided who needs to change, priority conflicts delay the overall outcome even more. In this situation, taking out the variable of available time, worked wonders. And everybody showed happy about “being forced” to deliver.

Finally, we must not forget that such broad and deep changes take time; easily multiple years. Radical new approaches must be learned and practiced – again and again, and again. During this time, you cannot overcommunicate – with regular blogs, townhall meetings, and in-person – over and over.

We learned that in software, people only do what they are convinced of. Now, that every company becomes a software company, everybody is facing the same truth, and everybody has to deal with it. This requires new leadership principles. It requires Dreams and Details.

Every Company Becomes a Tech / Software Company: Close Encounters of the Third Kind (By Guenther Tolkmit)

The Key to Motivation and Engagement: How to Establish a High-Performance Culture (By Mikael Trolle)

The Real Numbers for Value: Enabling Operations and Finance to Communicate (By Guenther Tolkmit)